The third restaurant of the Macellaio RC opened its doors to the customers recently in Southwark. RC which serves as the initials of the founder’s name “Roberto Costa” comes with the assurance that whatever you will have in the restaurant would command nothing but the finest meat which is imported weekly direct from locals farms in Piemonte.

The new restaurant is unlike any of its compatriots; it is based on the theatre-themed restaurant where two roles of butcher and meat kicks in. Talking about the ground floor, they have arranged a catwalk styled theme where the diners are always kept entertained by the butcher who shows his skills on the main stage. 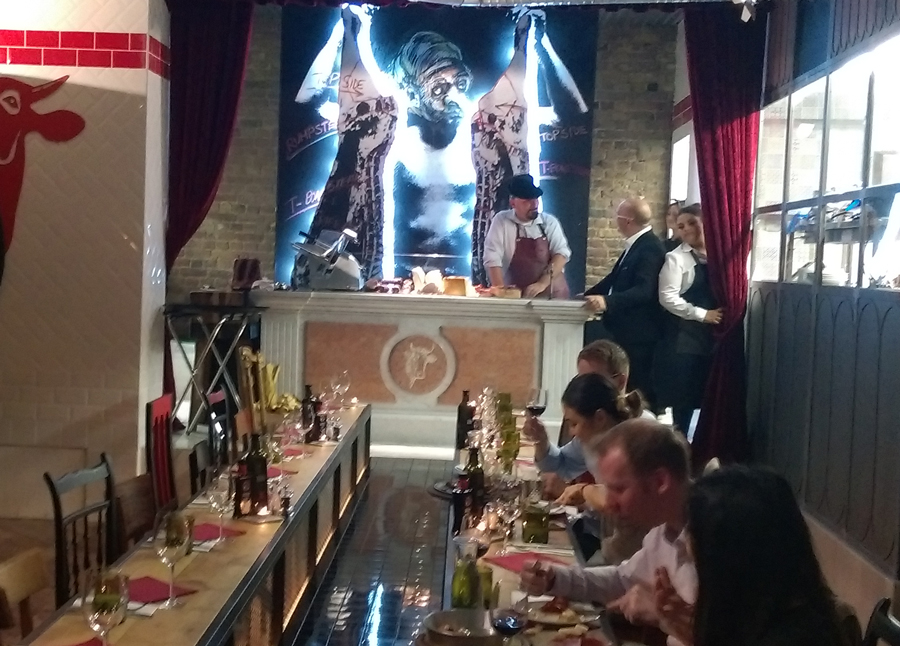 Moving to the second floor, the meaty theme is completely overtaken by the baking version. There you will find yourself aroused by the aroma of deliciously baked bread and cakes which mostly would not end up at your desk. It is the only place of Macellaio RC where the very traditional and light Focaccia “La Pissa” is made and supplied to the other two branches of it as well. Another thing that you may not expect from Macellaio RC is that this branch will not serve you Tuna fish like at Exmouth market Macellaio as it only has meat and Focaccia in its menu which you can have ordered on your table. 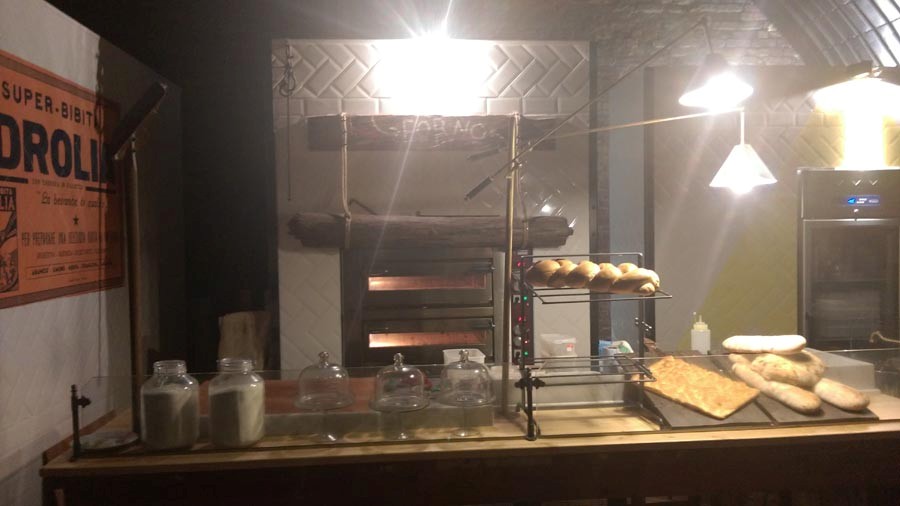 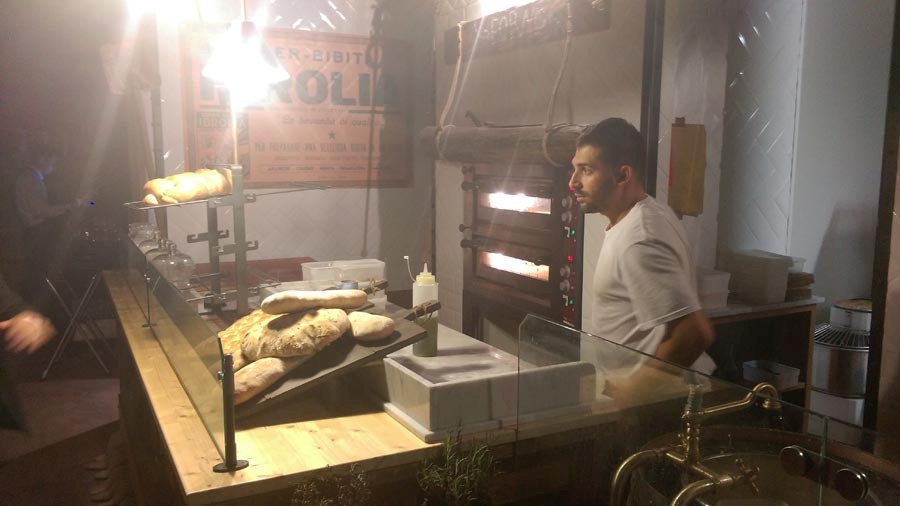 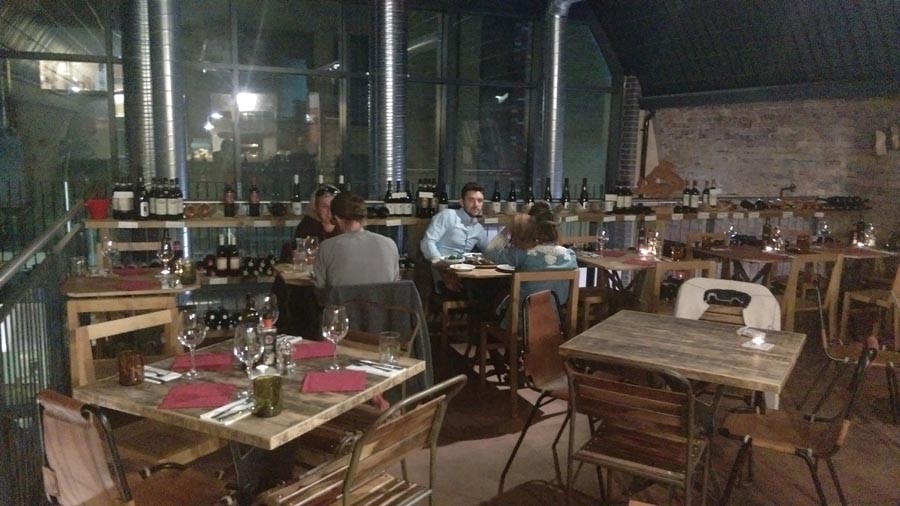 I don’t really think anyone’s dinner is complete without a fine sip of wine on his table. Same was the case with me: ordered a Montepulciano-d’Abruzzo wine which jelled perfectly well with what I had that evening. 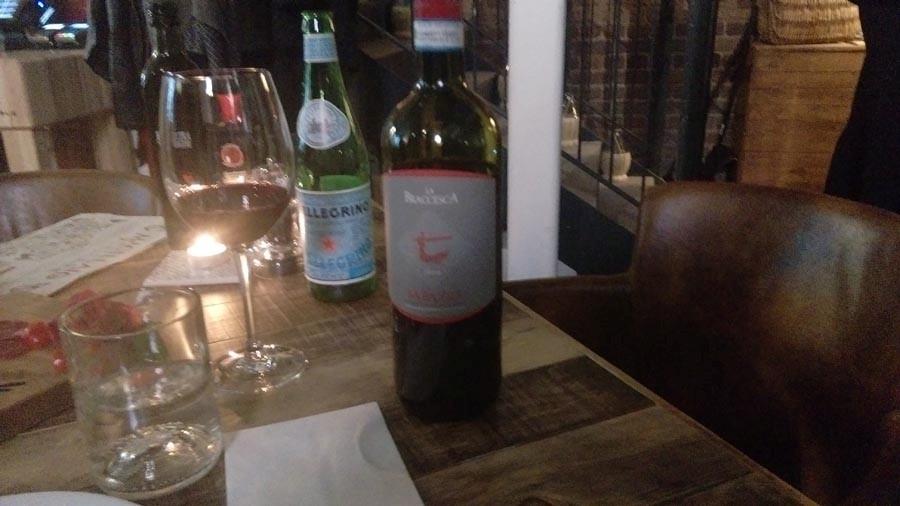 Starting off with the real food, for the starter I was given the Bresaola along with the cured sausage in Salami. The overall presentation of the dishes were good enough. With a sauce scattered at one end of the square plate and the other two ends occupied by the dish itself; I certainly could not have asked for a better presentation and the any better taste than it offered.

After receiving an absolute delight in the form of starter, my already high expectations from the main courses only hit new heights. After the starter, I ordered 2 different kinds of steak tartare to satiate my appetite for the best.

The first stake that I received was a traditional one delivering exactly what I always look for in a steak and that is the freshness of the meat combined with some delicious flavors. 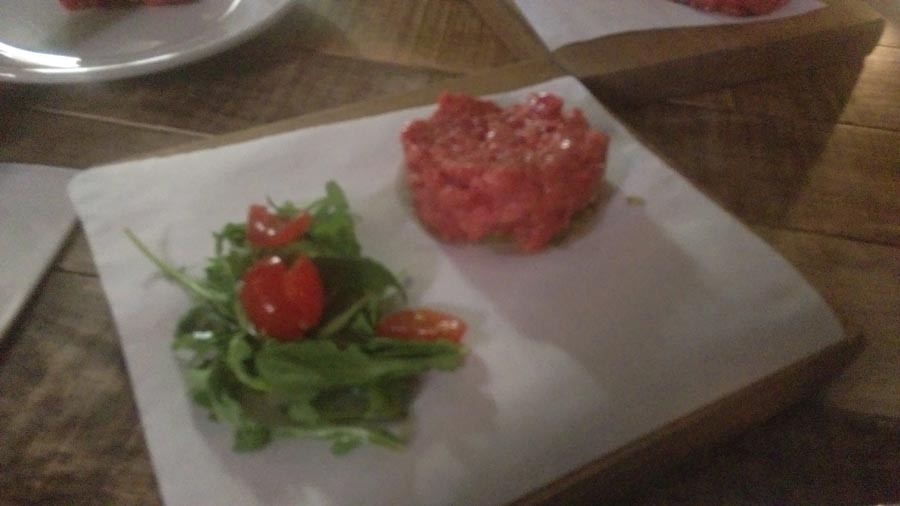 The second one however, was unable to meet the standards set by the first one. Since I am mostly in pursuit of the classic and traditional steaks, this one Gorgonzola Tartare was a bit out of my league but that does not mean it was not good. The melted Gorgonzola cheese did play its part and melted beautifully in the mouth but still; I would have preferred it in a more traditional way. 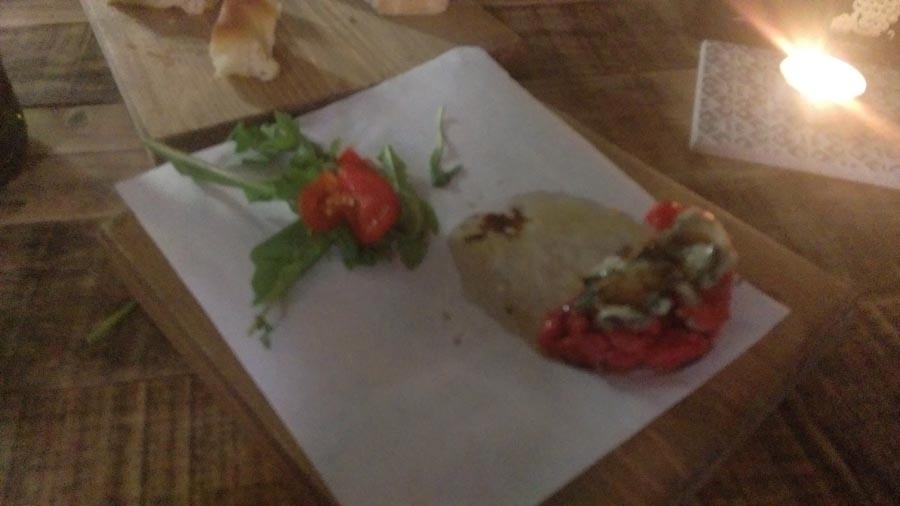 The centuries-old recipe is still followed here in this restaurant, more or less with some innovations brought from the modern age of Pizzas. The tradition of Genoa was presented to me much in the same fashion. It was all laded with stracchino cheese on it. Overall, the dish was good but a little too heavy with all those cheese. 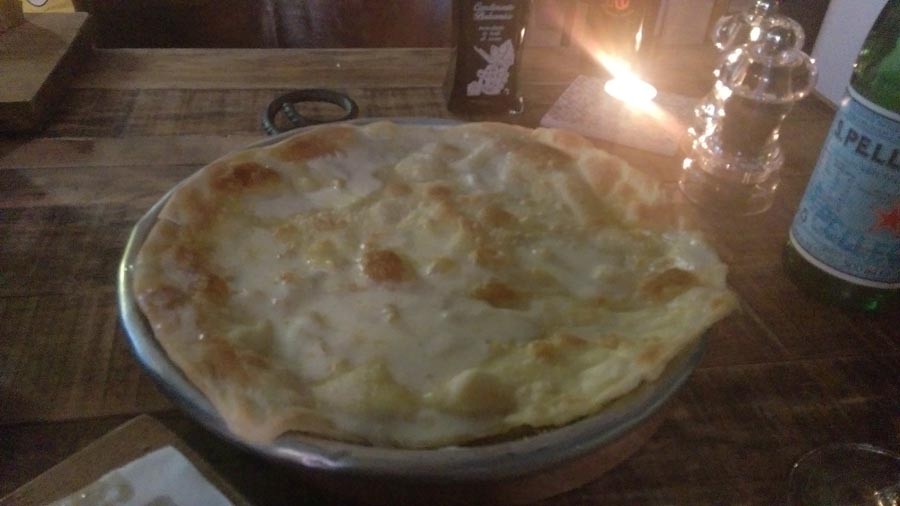 Amongst the best thing about this restaurant is that they show you the piece of the meat that they are going to cook for you. So, you know beforehand that what you will be served would be amongst the finest of cuts. 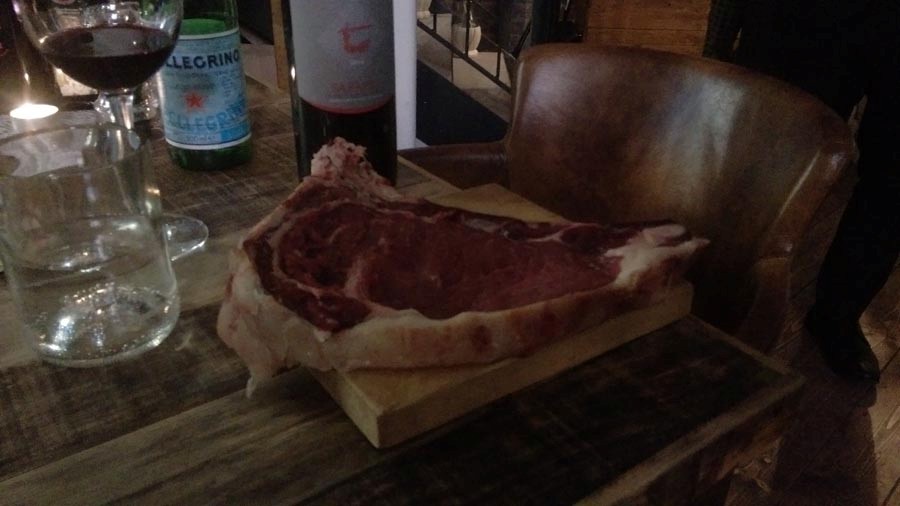 The way they have their steaks served is one of the things I love most about Maccellaio RC. All the steam and the aroma which escapes as soon as you lift the lid is something anyone would pay the money for! 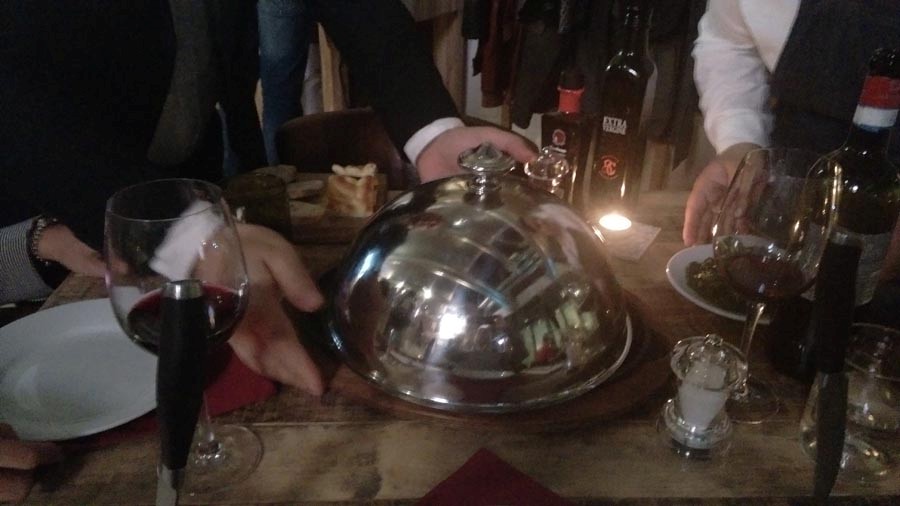 I went with the same T-Bone steak which I had in the MAcellaio RC located in Exmouth Market and like that same, I enjoyed every bit of the dish truly. The flavour-packed dish certainly gave a hard run for each penny that I spent on it. I truly had a pleasurable experience eating it; from the meat to the aroma, everything about it was inch perfect.

The caked that was put on offer for me had a flawless balance of flavours amongst its ingredients. The Cheesecake along with Basil Fior di latte was delicate enough and certainly reached the level that everyone looks towards to. 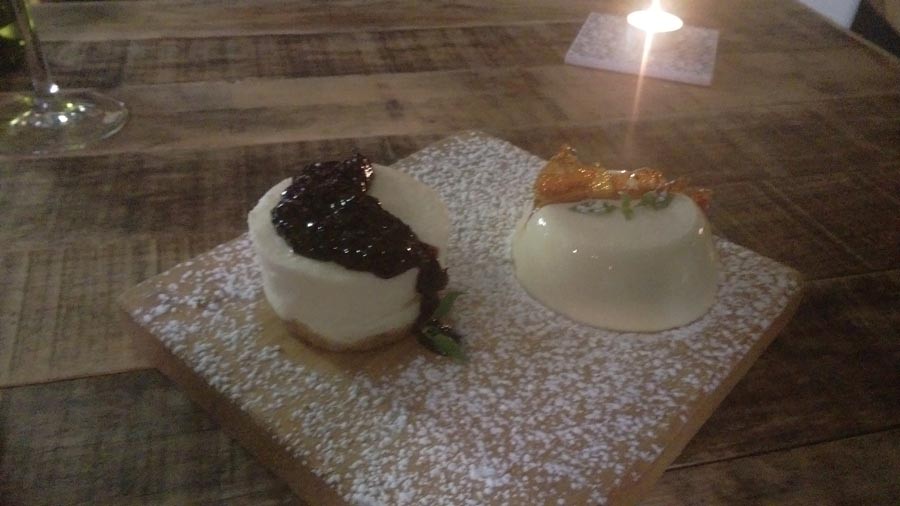 With the main stage set for the butcher and a setting that one would not find mainstream; Macellaio RC certainly gives an impression of a rugged place but that is absolutely not the case. In fact, it happens to be a fine dining place which offers extreme elegance and tranquillity that a diner expects of a high-end restaurant. With the picture of Roberto hanged in the centre which is coupled with the use of red colour certainly brings the place to the life. To put it into simple words, Macellaio RC offers peculiar settings and surroundings but all of this peculiarity vanishes once you finally set in because everything makes you feel at home away from home. 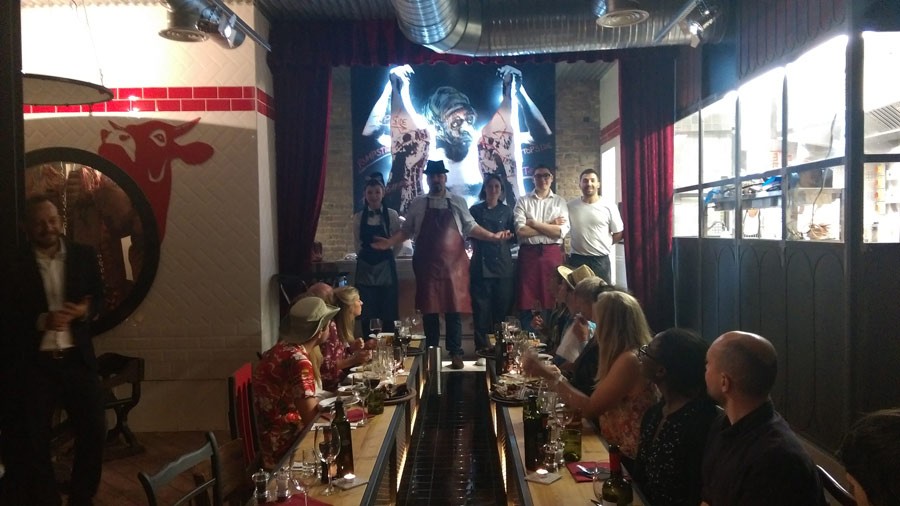 Saying good bye to the Audience 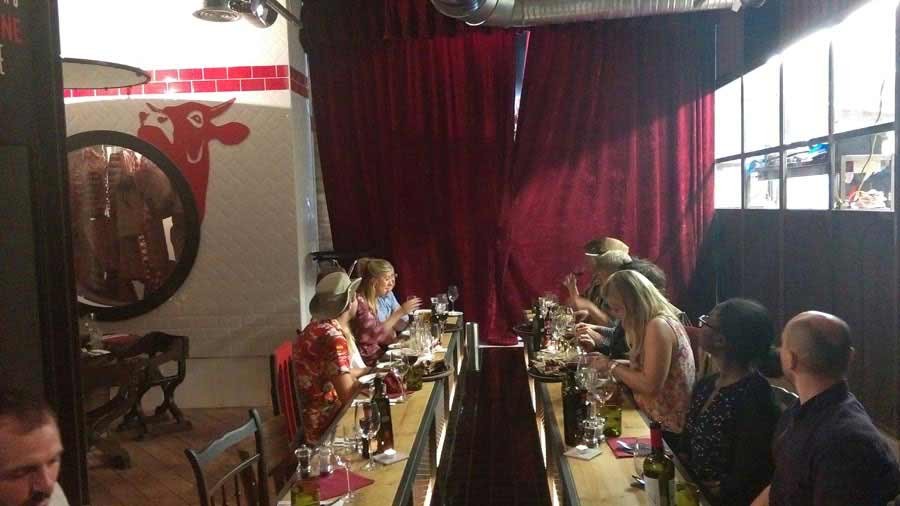